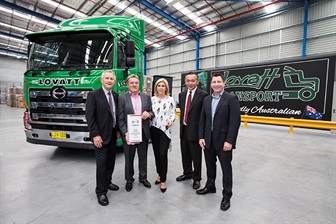 The 100,000th Hino truck sold in Australia has been handed over to Lovatt Transport at their new facility in Botany, NSW.

Established in 1979, Lovatt Transport is ranked number one out of all large carriers by the Sydney Ports Corporation for its operational performanc

The 100,000th Hino sold joins a fleet of 22 Hino 700 Series SS 2848 Proshifts already in the Lovatt stables, with more to be added to the constantly growing fleet.